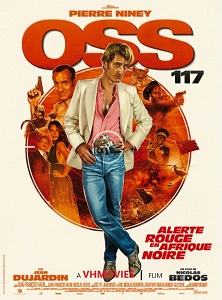 OSS 117: From Africa with Love

OSS 117: From Africa with Love opens in 1981 where OSS 117 has just returned from a successful mission only to be told he won’t be sent on another mission just yet but is instead sent to the office basement to computerise the DSESE’s files. He meets new recruit Serge, OSS 1001 (they’ve used all the 3 digit codes up now so have to use 4) before the latter is sent to Africa on mission.  Skip ahead and OSS 117 is sent to Africa to find his missing colleague and help President Bamba, of an unknown African country. Once he finds OSS 1001, the two are forced to pair up to save the day! What could go wrong?! OSS 117: Alerte rouge en Afrique noire/ OSS 117: From Africa with Love It was a delight to watch Jean Dujardin and Pierre Niney on screen together – I believe it to be the first time the two have been cast in the same film. Serge realising the much talked about icon is not as inspiring as he thought and Hubert wondering why he doesn’t have the latest equipment his younger colleague give rise to many amusing scenes. It’s also been a while since we’ve seen Pierre Niney in a lighter role – after his more serious roles in Black Box and Yves Saint-Laurent in AFFFF’s of past years (and also starring in Goliath in this year’s festival)– but this shows just how versatile he is. The sets in OSS 117: From Africa with Love place us perfectly in offices from the 70s with their browns, oranges and beiges, the huge computers, the floppy discs. Pierre Niney’s more modern outfits contrast nicely with his older colleague’s suits. If you’re sensitive to sexist or racist attitudes, even if they are being parodied not applauded, then avoid OSS 117. However, if you want to have a giggle at the ineptness and incorrectness of Jean Dujardin’s infamous character, you’ll enjoy OSS 117: From Africa with Love.

OSS 117: From Africa with Love Key

The Possession Of Michael King